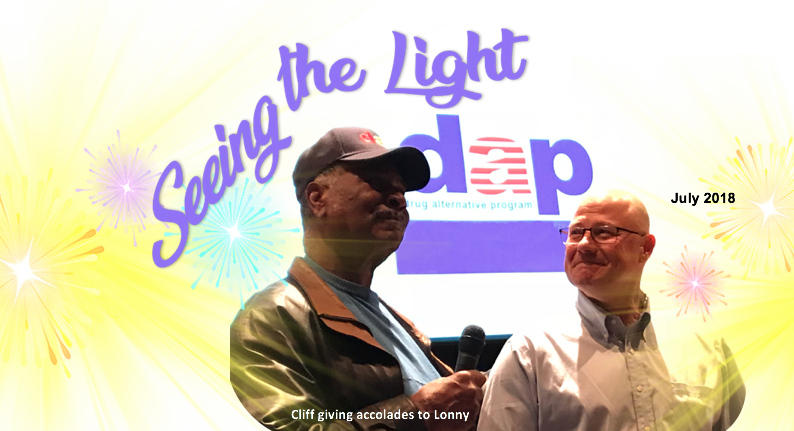 How willing would you be to expose your life of drug addiction to high school students? Our 2010 graduate, Lonny Shattuck, did just that. He was the Chapel guest speaker at the Sequatchie County High School in Dunlap, Tennessee. Linda, his wife and teacher at the school, along with us were there to support him.

Lonny never shies away from sharing his testimony with others and showing the love of Jesus. His testimony to the ninth graders was so very inspiring. After Chapel, the students went to the principal and insisted that he invite Lonny back so the entire school body could hear and benefit from his riveting testimony.

It was not just the students who were moved by Lonny’s story. Sgt. Chris Dennis, the school’s Resource Officer, was also in attendance. Lonny told about one of his arrests in Dunlap, TN several years ago when he was intoxicated and out of his mind. He had been tased by the police after pulling out his pocketknife. At the end of the presentation, Sgt. Dennis came forward and spoke to Lonny and Sara Jane Flowers, the School Counselor. He then spoke to the students saying: “I was one of the arresting officers that tased Lonny. Even though Lonny’s booking photo was on the screen, I did not recognize him until he shared the knife and tazer story, then I put two and two together. See, the day before we arrested Lonny, our department had just received the first tazer guns ever. We had not used them yet. Lonny was the first person we used it on. They were so painful that the department replaced them. It is rare, if ever, that we get to meet someone who has turned their life around. Maybe 1 in 10 offenders will see the light and make changes, but it is rare. So, it is good to be able to stand here today with Lonny.” The Officer hugged Lonny and expressed the joy of witnessing his conversion.

Lonny first graduated from the program in 2000. He regressed after five years and experienced a ‘death blow’ from Satan through chronic drug use that almost took his life. In 2007, through intercessory prayers on his behalf, Lonny called from the Tennessee jail asking to come back to the program. We shared his desperate condition with Jim and Dorothy Valcarcel, our close friends and major donors. They decided to pay for Lonny’s airline ticket ($400) and 12-month tuition ($9,000). Upon his return, Lonny graduated in 2010, and as you can see, their investment paid off in big dividends – a ‘brand plucked out of the fire.’

Today Lonny and Linda are living in Tennessee on their family property. They are enjoying the country living and working to help DAP expand the ministry in Tennessee and Alabama. And since we are only two hours away from them, we still have an important part of our DAP family close by.

Family member, we have many stories like Lonny’s that show the power of Jesus Christ in changing the lives of the men at DAP.

Several months ago, when we stopped to visit the Valcarcel’s, one of their first questions was, “How are Lonny and Linda doing?” And then they said, “You guys know that they are part of our ‘forever’ family.”

This is what happens when you donate to DAP, for by giving hope to those who are struggling on this earth – – we all are expanding our eternal family.

Just imagine what the day will be like when someone walks up to you in heaven, someone you don’t know, but they tell you, “I’m here today because of you.”

Please remember that it is not the size of the gift but the heart  in the gift.  Thank you for your gift today because every gift is important in the life of a “Lonny” or the hundreds of other men whose lives you have had a part in changing.