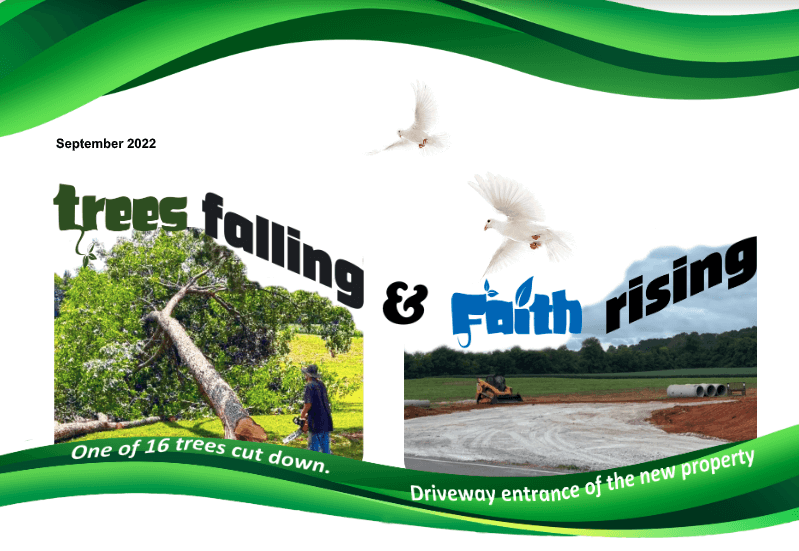 Last month was a very exciting month for us! So many things got accomplished and we are extremely pleased. The first movement on the land took place. We had 40 DAP family members and friends to join us for a potluck luncheon. A ‘soul food’ menu was chosen and each family brought a dish. We all celebrated and enjoyed the home cooked meal that included a variety of foods. The tree workers were invited to join in with us and they too enjoyed the food. The spirit and energy were remarkable and the food was so scrumptious.

The purpose of our luncheon was to give everyone an opportunity to come and participate in the cutting down of the 16 trees. As we have stated before, cutting the trees was done to prevent losing an acre of land between the new Transition Home and the Recovery Home. We were saddened to cut down God’s beautiful creation; however, the space is much needed to build the homes closer together. We were all captivated seeing trees as high as 30’ tall tumble to the ground. We also got a good view of where the workers had started landscaping the driveway entrance of the new property. The whole crew did an excellent job and Cliff was well pleased.

The rough draft of the Master Plan prepared by Chapman Sisson Architects was displayed for the group’s viewing. This was so exciting for them to see the visual layout of the proposed 10 acres. It really brought the plans to life. We’re so grateful for all of those who came to experience the reality and framing of this exciting time in our lives. As often as we can share things like this with you family, gives us more encouragement and faith that God will do what He said He would do! Halleluiah!

We are seeking the Lord daily and He is directing our plans. This is where your continued prayers, support, donations and whatever else God puts on your heart are needed for the development of phase I of the Master Plan. Also, your referrals of humanitarians and/or organizations you think would be willing to join hands with us is also appreciated. We have decided to build the storage units first to help increase the income of the ministry.

Since getting involved with this project, the thought of Jabez has often come to mind. The Bible says, “Jabez was more honorable than his brothers. Oh, that you may bless me and enlarge my territory.”  Have you ever stopped to wonder why Jabez was more honorable than his brothers? Did he have a different view of God’s concern for His people? Jabez was willing to ask God for something the average person would not ask. Why? Do you think it had anything to do with him being reminded daily, that his name meant “pain?” Can you imagine such dishonor? Jabez did not settle for his apparent “lease on life.” Though this negative reminder was constantly with him, it drove him to ask God for the impossible. What did he have to lose? Jabez dared to open himself up to the Power of God, to honor him with a better life, more so than even his brethren.

God instantly expanded his territory; just as He has expanded DAP’s territory, because we dared to ask. And, it’s the same with our clients, these men dared to ask God to expand their territory… away from that which was taking over their lives. Now, we are appealing to you, our Land Partners, to go before God and ask Him to expand your giving as never before. Not that you are doing it for this reason, but watch the beauty of God’s miracles in your lives as you trust and obey His voice. Thank you, thank you, thank you for your loving and generous gifts! We are so humbled by your continued support. We love and appreciate each one of you so very much! You are in our hearts eternally.